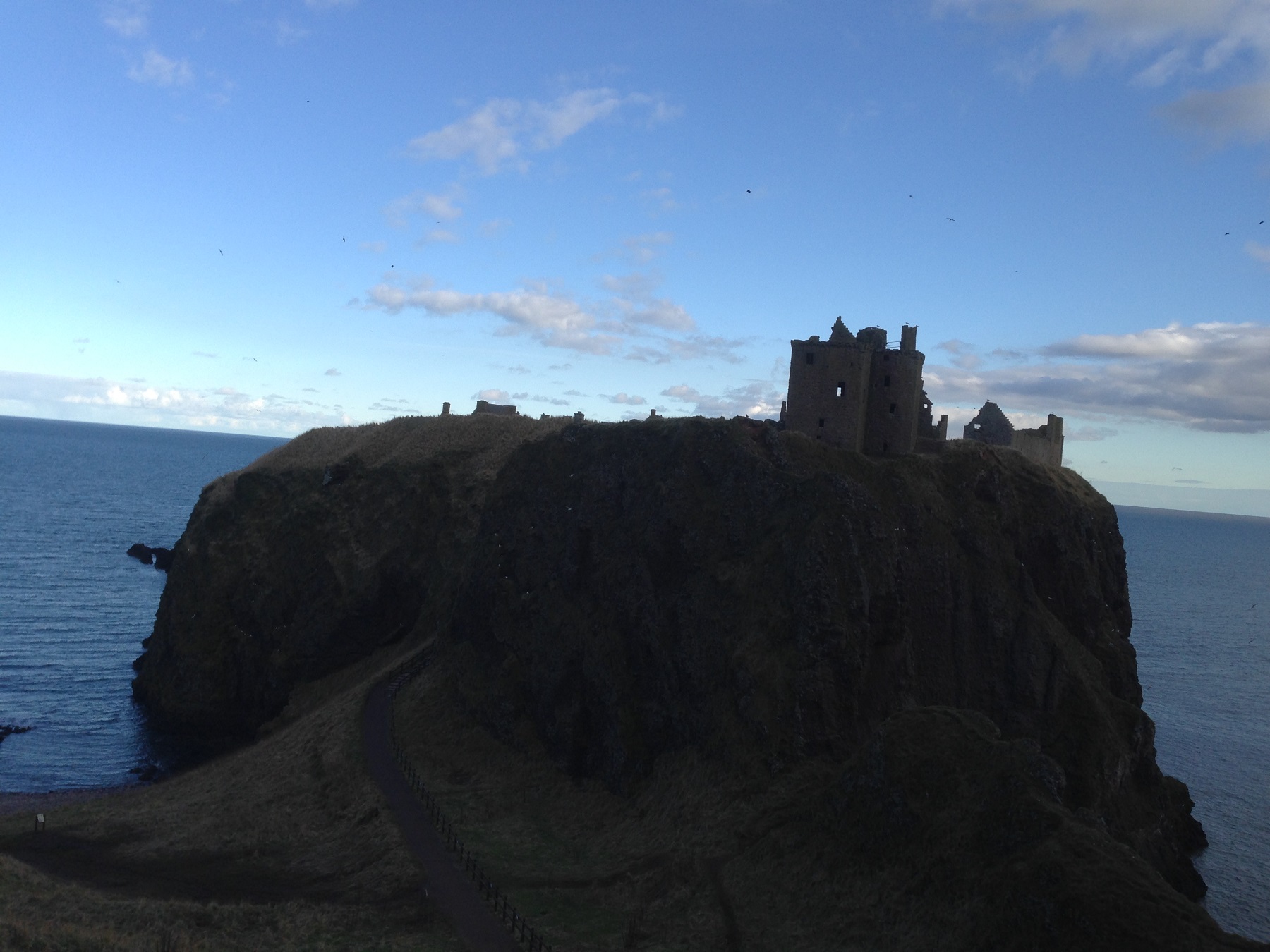 “He ran a hand over his face and shook his head. “Lass, I have never lied to you. I adore you and there have never been any other women from the future here. And these” – he flung a tampon in the air – “cleaning swabs, I cannot fathom why they upset you so greatly, but I assure you I have never let the maids use them.”

Circenn is charged with the task to protect the fay hallows. As one of them (the flask) goes missing, he bewitches the object so that the first one to touch it, will be transported to him. To the fay, Adam Black, whom we know from the first audiobook Beyond the highland mist, he then vows to kill, whoever carries the magical object. However, when Lisa, a stunningly beautiful 20th century lass surprises him in the bathtub, he’s too startled to react. Instead, he locks her in, while he’s struggling with himself to either keep his vow and honour the rules, which he has lived by for centuries or to choose love and thereby, embrace his fay half. All the while, Lisa tries to find her own way back into the 20th century, where her dying mother has to struggle through her illness all on her own.

The conflict of being half fay

There’s no lack of conflict in this plot. Circenn for one is fighting a constant battle with himself being half fay and half human. By courtesy of Adam Black, he’s immortal. After living through hundreds of years of standing by while both friends and loved ones die, the only thing that keeps him sane is a set of rules, one of which is to honour any vow given. Lisa’s arrival somewhat disrupts his world. Instead of a thief, he’s confronted with an intelligent, determined, and not to mention gorgeous young woman unwilling to be killed by an equally enchanting man. Lisa for her part has troubles of her own to take on. Since her father died without concluding a life insurance, Lisa is left to support her dying mother running two jobs at a time. Consequently, being cast into medieval Scotland is the last thing she needs.

“The highlander’s touch” has been criticised for its fast pace, which sacrifices a lot of the suspense of the first two books. Instead of finding ways to prolong the couple’s union like in “Beyond the highland mist” and “To tame a highland warrior”, there are several characters, who try to force them together. None other than Robert the Bruce, King of Scotland, announces their supposed engagement, practically forcing them to marry. All the while, Adam Black, to whom Circenn has made his vow in the first place, tries his best to make him less stuck up. In the end, Lisa gives up her hope to return home, and Circenn abandons his vow. Still, their relationship is tinched with the secret of Circenn being half fay. What I liked best about the couple’s relationship was that they are able to feel each others emotions, thereby ensuring a deep connection between the two characters.

Half fay romance, half highlandery

What puts this audiobook apart from the previous ones is the more pronounced focus on historical persons such as Robert the Bruce, King of Scotland, and the order of the Knights Templars as well as events such as the battle of Bannockburn in 1314, which marked the victory of Robert the Bruce over King Edward of England. Besides mentioning the berserkers (legendary invincible warriors), Moning also provides more background information about the fay, especially the blackest fay, Adam Black. After Moning has painted him as a deceptive and at times deathly figure in her first audiobook, “The highlander’s touch” explains a lot about his motives making him seem more human than any other fay. The historical facts made the story more vibrant and believable, even though they don’t play a decisive role in the plot. Since I enjoy multi-dimensional villains, who turn out to be heroes in a way, I’m glad for the reappearance of the blackest fay.

Only half fay, but fully male

As always, the narrator’s voice gives a special touch to the characters. This is true for Circenn, who’s sexy burr convinces me of his irresistible charm. I also like his performance of Adam Black and his impersonation of the little boy visiting Lisa. Gigante puts a mocking laughter into their voices that fits their mischievous personality. At the same time, Adam can be serious and even angry. Usually, I don’t like Gigante’s performance of female voices that much, because he makes them sound too soft for my taste, but I make an exception for his performance of the fairy queen. The pitch and tone was just right to make her sound both superior and condescending.

What I liked about Lisa was her sponky behaviour whenever it comes to finding a way home and protecting herself from harm. From climbing down the window of a Scottish castle to attacking Circenn with a piece of broken pottery, she doesn’t give up without a fight. On the other hand, she tends to be ridiculously weak-kneed when confronted with Circenn’s ever present hugeness. I don’t expect or want too realistic a scenario in a romance novel. However, I find it somewhat hard to believe that a modern woman (or any kind of woman, for that matter) is constantly on the edge of swooning over a hunky guy. On the other hand, if such a hotty existed in real life, perhaps I would think otherwise.
Circenn himself, apart from being constantly aroused and intensely attractive, lacks a few of the attributes that make out a proper highland laird. First off, nobody truly seems to listen to what he has to say. He has a fixed set of rules including no sex in the kitchen, but in the end, nobody cares. Additionally, due to his immortality, he doesn’t have the tight family bonds usually associated with highlanders. Fortunately, he has the build and the dreamy voice, which makes up for a lot.

Moning found a way to enrich this audiobook with the reappearance of known characters, a pinch of historical detail, and the background of Adam Black. Even though, the plot lacks somewhat in suspense, it makes up for it through the deep connection between the protagonists and Gigante’s performance. If you want to learn more about our favourite fay, read my review on The immortal highlander. I promise, he will play a major role, there.