Foreign princess marries highlander instead of the gentle-hearted laird she was planning on. 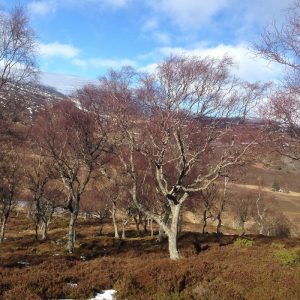 This audiobook is the third and last in the highland’s lairds series by Julie Garwood. It was published eight years after Ransom, the second book, and 15 years after The Secret.
Princess Gabrielle of St. Beil is engaged to be married to an elderly laird known for his peaceable character in order to secure King John’s reign over the moody highlanders. Unfortunately, her fiancée is killed before he ever gets the chance to meet his bride. Promptly, two barons, who have chased after Gabrielle for years, see their chance to claim the foreign princess. She is falsely accused of being free with her affections, and consequently banished as well as relieved of her title and privileges. Colm MacHugh witnesses Gabrielle’s fall from grace. His ally Brodick Buchanan, whom we know from Ransom, and who’s related to Gabrielle by marriage, persuades him to take action. Colm grudgingly agrees. Gabrielle’s agreement takes a little bit longer.  Additionally, her banishment doesn’t stop the English barons from assaulting her, because legend tells of a great treasure associated with the royal family of St. Biel.

Shadow music is definitely the right name for this audiobook, because to my mind, the story is certainly not more than a shadow of the previous two. I missed a true connection between the two lovers. As in The Secret and Ransom, the male lead marries his woman primarily out of a false sense of responsability. The relationship is rushed from the moment, they meet. Sure, Gabrielle saves Colm’s brother and Colm cannot escape his attraction for Gabrielle, but they fall in love rather fast. There is resistance on Colm’s part as with every male protagonist in Garwood’s audiobooks. But it all feels more like a parody of her previous stories than anything else. The main problem is that Colm doing Brodick a favour in marrying Gabrielle doesn’t seem to be a sufficient reason or foundation for their union, even though they come to. love each other.

The voice of a foreign princess

My complaints about the couple’s similarities don’t mean, of course, that the audiobook is not worthy of being listened to. There is one thing that saves a great deal of the story for me: The narrator Rosalyn Landor. Landor is known for being a British movie and TV actress. In the audiobook genre, she is also loved for her performance of historical romance audiobooks. Personally, I enjoy her upper-class British accent, her manly interpretation of Colm and the cool, yet stubborn streak of Gabrielle. Landor manages to attribute a different, recognisable voice to every character, which make the sometimes dragging political intrigues bearable.

Who wears the pants when princess marries highlander?

“Gabrielle turned to Colm. “These men will be of interest to you.”
Colm looked them over. “Why is that?” he asked.
With her back to the infidels, she whispered, “They like to dig holes.”

Gabrielle is somewhat of a contradictory character. I think, this is the main problem with the audiobook. On the one hand, she can shoot an arrow better than her four guards, is used to do as she pleases and doesn’t possess an ounce of vanity. On the other hand, she can’t suffer her guard to kill a man and is learned in the art of female accomplishments. Don’t get me wrong. I like that she is portrayed as confident. But her traits are contradictory and therefore unconvincing. Why does she need four guards, if she’s that accomplished herself? Still, I enjoyed every single scene, in which the foreign princess disobeys her intimidating highlander, if just because of the baffled reaction of the man. A definite plus is the trade mark humour of Garwood’s audiobooks. The way, the monks quarrel about who has to talk to Colm offers a lightening amidst a story of political intrigue. Also, the two mischievous MacHugh boys are very funny to listen to. I simply love Garwood’s senior and children’s characters. They are adorably naive. Moreover, I would like to mention the four guards that protect Gabrielle. The story of the loyalty to their princess and their home land, their skills that rival those of the highlanders, and their French accent made them my favourite characters in this story.